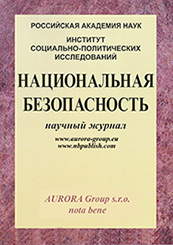 This issue is currently being formed. All articles presented on this page have already been included in this issue, are considered published, and will remain unchanged in the final version of the issue along with other metadata of the articles.
Founder: Danilenko Vasiliy Ivanovich, w.danilenko@nbpublish.com
Main editor: Shul'ts Vladimir Leopol'dovich, doktor filosofskikh nauk

Review: The authors of the article investigate the current state and new trends in ensuring food security of subjects at various levels: from global to household level based on the application of an approach that includes the study of production aspects, economic availability of food, various components of the problem of food consumption, as well as the preservation of the current situation in the medium and long term. Special attention is paid to new factors affecting the state of food security: the growth of living standards in developed and some developing countries leads to increased requirements for the quality and safety of food; the new "green agenda" transforms agro-food systems towards greater sustainability. In the course of the study, diagnostics of the current state of food security was performed, as a result of which a number of certain negative trends were identified, among which: a decrease in the economic availability of food for the population of the Russian Federation as a whole, and especially for such individual groups as large families living in rural areas, families with disabilities, as well as families consisting of from unemployed pensioners. There is also a problem with an incomplete system for assessing the quality of food, as a result of which goods are falsified, the level of trust in public authorities decreases, and negative consequences for people's lives and health arise.
Keywords: economic access to food, food supply, quality standards, food fraud, food quality, food independence, food consumption, food safety, food security, agri-food sector
Strategy of national security

Review: The subject of the research is the method of expert assessments for ranking threats to the national security of the Russian Federation. The object of research is the process of ensuring the national security of the Russian Federation. The following expert methods are considered in the article: direct placement method; method of analysis of hierarchies; method of expert ranking of factors influencing the result. In this study, the existing approaches to the activities of expert groups based on the method of ranking factors are considered in more detail. Within the framework of this method, factors are ordered according to the degree of manifestation of their properties and influence on the ultimate goal (national security) in ascending or descending order. The method is used when it is impossible to quantify the factors that determine the course of processes in socio-economic systems. The scientific novelty of the use of expert approaches is substantiated by the authors by the lack of necessary statistical information on the quantitative characteristics of the relationship between threats to the national security of the Russian Federation and the factors that form them, as well as by the possibility of filling this gap by expert means. The article presents the results of a survey of 23 experts - specialists in the field of national and economic security on the ranking of threats identified in the National Security Strategy of the Russian Federation. The authors conclude that the use of the method of expert assessments for ranking threats on a point scale makes it possible to determine the most significant and urgent threats to national security based on the experience and knowledge of highly professional experts. The method is simple, understandable and convenient for decision makers, and gives them the opportunity to quickly take measures to minimize and neutralize threats to national security in order to further strengthen it. The technology of forming an expert group and conducting an online survey of experts can be widely used in Russian practice in solving problems to ensure the national security of the country.
Keywords: online expert survey, score scale, National Security Strategy, threat ranking, method of expert assessments, factor ranking method, threat, factor, expert approach, National security
Doctrine

Review: The object of the study is the relations in the field of international security arising from the exercise of State sovereignty by the People's Republic of China. The subject of the study is presented by the normative legal acts and sources of "soft law" of China, as well as the doctrinal developments of Chinese and Russian scientists in the field of national security. The idea of a "community of a single destiny of mankind" promoted in international relations is considered. Objective prerequisites for clarifying the concept of national security are characterized as signs of the onset of an "era of change" in international relations. The role of the speech of Secretary General Xi Jinping at the opening of the XX National Congress of the Communist Party of China in consolidating the content of the foreign policy and domestic policy of the state is determined. The concept of China's national security is embodied in the "comprehensive security concept" model, its implementation in the "new era" has the following features. First, it is strengthening coordination and positive interaction with other major States to build relations characterized by peaceful coexistence, general stability and balanced development. Such relations will help counteract unilateral economic sanctions. Secondly, it is government support for the key technology sector as a counterbalance to radical trade policy measures of unfriendly countries. Thirdly, it is a direct dependence of national security on social stability. And finally, it is the promotion of the idea of a "new international order" as a natural way out of the impasse in the development of a unipolar world system in which countries representing a tenth of humanity. The new type of global order emphasizes peace, development, equality and democracy. This idea of the Chinese leadership is very popular all over the world and sharply contrasts with the anachronistic principles of the current system.
Keywords: international relations, CCP National Congress, Communist Party of China, China, digital sovereignty, state sovereignty, personal data, information security, national security, international law principles