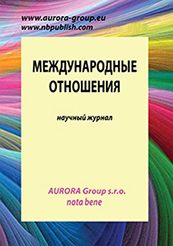 Review: The article is devoted to the analysis of the strategy of good neighborliness in Turkey's foreign policy. The strategy is aimed at increasing the role of Turkey in the international system. The purpose of the study is to examine the theoretical provisions of the neighborhood policy, to identify the reasons for its transformation from the point of view of Turkey's national interests within the framework of the transformation of the system of international relations and changes in the balance of power at the regional level, as well as to identify new trends within this policy. The methodological basis of the research is the method of system analysis and the historical method, with the help of which the article analyzes the main stages of the development of the "zero problems with neighbors" policy. The author examines in detail the strategy of good neighborliness from the moment of its adoption to the present time. This strategy justifies Turkey's regional leadership. Special attention is paid to the reasons for modernization and transformation of the neighborhood strategy. The author examined in detail the force factor, which became an integral part of the strategy after the failures of Turkish diplomacy and with which Turkey strengthened its influence in neighboring regions. The power policy allowed Turkey to become a participant in regional conflicts, clearly identify its interests and demonstrate determination in their defense. According to the results of the study, it is concluded that Turkey is returning to the original peaceful version of the neighborhood policy. This strategy continues to be a key one in Turkey's foreign policy.
Keywords: Recep Tayyip Erdogan, Ahmet Davutoglu, foreign policy strategy, South Caucasus, Eastern Mediterranean, Middle East, Turkey's regional policy, Turkish diplomacy, neighborhood policy, Turkey
Question at hand

Review: This article is built around the phenomenon of "imperialism" and represents an understanding of the role of the object under study in modern international relations. The aim of the work is a theoretical definition of the essence of imperialism as a phenomenon in world history and world politics. The author analyzed imperialism from the point of view of two of the three main paradigms of international relations – Marxism and political realism, and within the framework of the second mentioned paradigm tried to form a new concept of imperialism in the theory of international relations, which would be less ideologized, but an equal alternative to the Marxist view. It is noteworthy that the author deliberately did not use the works of pioneer researchers of the phenomenon under study and focused on more modern, relevant and less well-known works that already show the dynamics of the development of scientific research. The author comes to the conclusion that, from the point of view of two paradigms analyzed in detail, the modern world can be called imperialistic, and imperialism is inextricably linked with the system of international relations and the current world order. The main achievement of this work is the development of the author's concept of imperialism, created with respect and based on the research of non-Marxist predecessors. It should also be argued that some scenarios of the collapse of such an order can be perceived by Marxists as the collapse of imperialism, but for another paradigm only the final fall of all powers can mean its collapse. The author also admits that imperialism of the new world order will evolve to its new state, acquire new levers, forms, and will be characterized by a different set of methods.
Keywords: theory of international relations, world order, dominance, hegemony, the sovereign approach, political realism, marxism, the world is a system theory, imperialism, leadership
Challenges and threats to international security

Review: The subject of the study is to identify the place and role of terrorist organizations in the system of international relations and global security from the point of view of strategic approaches of the Western expert-analytical community and official political institutions of nation states, the EU and NATO. Globalization, the growing influence of non-State actors, including armed groups, as well as changing views on the nature and essence of the State have contributed to the hidden or explicit subjectivization of many participants in the international political process. Special attention is paid in the article to the new concept of "hybrid actor", which is widely discussed among experts and scientists at the present time. For the first time, the paper attempts to compare the positions of the United States and its European allies on interaction with hybrid actors. Thus, in recent decades, non-State actors have evolved in terms of political, social and military capabilities. This trend is evident in the Middle East and North Africa region, where the combination of weak State institutions, the presence of conflicts and instability has provided fertile ground for the actions of armed groups. Non-State armed groups in the Middle East are extremely diverse and include local, tribal and communal formations, transnational criminal organizations and networks, classic rebel opposition groups and so on. Within this broad category, a number of non-State armed groups have evolved to perform political, social and managerial functions.
Keywords: expert community, hybrid threats, national security, EU Global Strategy, European Union, NATO, General Security Policy, hybrid actor, HAMAS, quasi - states
Humanitarian interventions

Review: The subject of this study is statistical data related to the illegal immigration in the UK, as well as the opinion of scientists regarding the causes and consequences of these processes. The goal is to structure the available data, identify the correlation between events, identify causes and consequences, and indicate possible ways to solve the problem. Methods of statistical analysis, induction, and comparison are used in this work. The study used a systematic approach, which resulted in the following conclusions: the arrival of illegal migrants to the UK in most cases occurs through the La Manche Channel; among the positive consequences of an increase in the number of migrants are: an increase in unskilled labor, unpredictable economic growth in 2021; among the negative, we can note an increase in the number of crimes committed by non-citizens of the country, in comparison with the number of crimes committed by citizens. The novelty of the study is: the dynamics of migration in the period 2019-2021 are revealed; it was revealed that the increase in the dynamics of migration from Iran to the UK in the period 2019-2021 was associated with the pandemic of coronavirus infection, a drop in living standards in Iran and the socio-political situation in Afghanistan; it was found that the consequences of illegal migration for the UK were unpredictable economic growth in 2021, as well as an increase in the crime rate among non-citizens of the country.
Keywords: crime, labor force, illegal migration, Iran, English Channel, Great Britain, Economy, pandemic, standard of living, migration