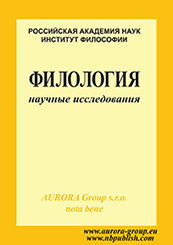 This issue is currently being formed. All articles presented on this page have already been included in this issue, are considered published, and will remain unchanged in the final version of the issue along with other metadata of the articles.
Founder: Danilenko Vasiliy Ivanovich, w.danilenko@nbpublish.com
Main editor: Sheremet'eva Elena Sergeevna, Doctor of Philology, e.sheremetyeva@gmail.com

Review: The subject of the study is the genre originality of Erzya, Moksha and Russian folk ballads, the object of the study is typical and rare ballad plots and characters, which allows us to consider the phenomenon in all the variety of genre aspects. The article, based on scientific literature and folklore material, characterizes the poetic techniques and visual and expressive means used in Erzya, Moksha, and Russian ballads. A special contribution of the authors to the study of the topic was the comprehension of the ballad through the prism of the memory of the myth, which is persistently present in it. Erzya, Moksha and Russian ballads are united in genre with their thematic diversity. Their characters and events represent different aspects of life, illustrate various aesthetic and moral codes, obeying a common poetic system. The scientific novelty lies in the consideration of the elements of the myth in the ballad, the content of which is transformed in it, it does not explain the myth and cannot do this, because it has lost its understanding. But she operates with the data of the myth, retains the attributes of the myth in her poetics, which allows her to have a complex genre constitution that leads away from a simplified understanding of the plots and images of the actors. Erzya, Moksha and Russian ballads are the product of national mentality, artistic and aesthetic, social, moral views. In them, the life of the people is concretized by the destinies of individuals, the emphasis is on spiritual life, on ethical, social, moral ideas – both traditional and those that have arisen at a new stage of historical development. Their attention is drawn to the tragic aspects of human existence caused by his negative reaction to the world.
Keywords: myth, ballad consciousness, plot, character, Moksha ballad, Russian ballad, Erzya ballad, ballad, genre, motive