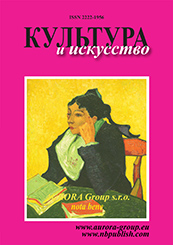 This issue is currently being formed. All articles presented on this page have already been included in this issue, are considered published, and will remain unchanged in the final version of the issue along with other metadata of the articles.
Founder: Danilenko Vasiliy Ivanovich, w.danilenko@nbpublish.com
Main editor: Rozin Vadim Markovich, Doctor of Philosophy, rozinvm@gmail.com

Contents
Contents details
Theoretical culturology and the theory of culture

Review: The article considers the formation and development of meanings of the Phoenix as an imaginary beast-sign, a bearer of the bestiary code of Chinese culture. The methodology of highlighting the stages of evolution of the image of the beast-sign and analysis of its meanings is based on the ideas of Russian semioticians V.N. Toporov and A.E. Makhov concerning the historical typology of beast-signs from totem to zoomorphic images, then bestiary images and images-embodies. As a result of the study it was found that the imaginary totemic image-sign Phoenix was formed on the basis of domestic birds: chicken, pheasant, peacock and other animals, the zoomorphic image of the Phoenix symbolised the Sun God, Fire God (female image), Wind God (male image) of the polytheistic pantheon of ancient Chinese Gods, The phoenix became an emblem of imperial power and its female bearers (empresses, princesses, concubines), and finally, in the course of cultural history the image lost its religious and political significance, the phoenix became an emblem of love, femininity, happiness and harmony. Understanding the changing meanings of the phoenix as one of the beast-signs, the carriers of the Chinese cultural code, will enable a better understanding of the aims and values of Chinese culture at different stages of development, as well as the mechanisms of cultural continuity and cultural development in China, making possible endless renewals on the traditional cultural ground.
Keywords: beast, phoenix, emblem, totem, symbolic meaning, cultural code, symbol, chinese culture, chinese bestiary, sign