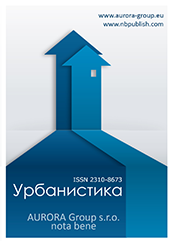 This issue is currently being formed. All articles presented on this page have already been included in this issue, are considered published, and will remain unchanged in the final version of the issue along with other metadata of the articles.
Founder: Danilenko Vasiliy Ivanovich, w.danilenko@nbpublish.com
Main editor: Slabukha Aleksandr Vasil'evich, PhD in Architecture, slabuha@mail.ru

Review: The thermal regime of road surface and basements is an important factor determining their reliable and safe operation in the cryolithozone. The aim of the research was to quantify the possibility of replacing the layered environment of the road's soil base with an equivalent homogeneous soil with an average coefficient of thermal conductivity when calculating the depth of the road's thermal influence zone. Two methods of averaging the thermophysical properties of a layered medium are considered: weighted average and arithmetic average. Dependences are obtained for determining the degree of deviation of the properties and thicknesses of the layers of the soil base, in which both methods are acceptable for engineering calculations. As an example, the two-layer medium of the road base is considered. For the analysis, the classical formula of the depth of thermal influence was used, obtained from the solution by the integral method of the one-dimensional equation of unsteady thermal conductivity. Simple engineering formulas are given for the relative error in determining the values of the depth of thermal influence when using an equivalent layer of pavement in calculations. A concrete example of calculating the depth of the zone of thermal influence in the two-layer soil of the road base is considered. The equation of the functional relationship between the parameters characterizing the degree of deviation of the thickness and thermophysical properties of individual layers from each other is obtained, which provides an error in the calculations of the depth of the zone of thermal influence less than the permissible value. The results of numerical calculations are presented in the form of 2D and 2D graphs, which allow us to visually assess the influence of the range of changes in the values of the thermal conductivity coefficients of individual soil layers on the legality of using various methods of constructing an equivalent single-layer road foundation structure.
Keywords: error, equivalent, thermal regime, forecast, coefficient, thermal conductivity, layer, permafrost, road, calculation