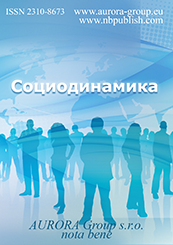 
This issue is currently being formed. All articles presented on this page have already been included in this issue, are considered published, and will remain unchanged in the final version of the issue along with other metadata of the articles.
Founder: Danilenko Vasiliy Ivanovich, w.danilenko@nbpublish.com
Main editor: Popov Evgeniy Aleksandrovich, , popov.eug@yandex.ru