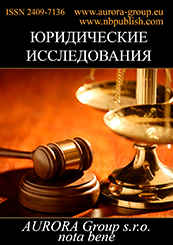 The Journal "Ţđčäč÷ĺńęčĺ čńńëĺäîâŕíč˙ " had ISSN 2305-9699 and was previously called "NB: Matters of law and politics" until December 1st, 2014.

Review: In the conditions of the observed economic turbulence caused, among other things, by coronavirus restrictions, there is an increase in cases of insolvency of economic entities. In addition, the legal landscape of bankruptcy of legal entities has undergone major changes. Confirmation of this provision is the fact that it is currently planned to introduce significant changes to federal legislation, the understanding of which actualizes the presented research topic. The object of the study is regulated by the norms of civil, arbitration procedural law, bankruptcy legislation, public relations that develop within the framework of the bankruptcy procedure of legal entities. The subject of the study is the theoretical and practical problems of the institute of insolvency (bankruptcy) of legal entities. The authors consider in detail such aspects of the topic as the problems faced by legal entities during the pandemic and their impact on the specifics of the bankruptcy procedure; doctrinal and legislative aspects of the etymological features of the categories "insolvency" and "bankruptcy", "signs of bankruptcy" and "criteria of bankruptcy"; issues related to the implementation of interim measures of the parties during the bankruptcy procedure, etc. Particular attention is paid to the analysis of the changes that the legislator plans to make to the law "On Insolvency (Bankruptcy)". The main conclusions of the study can be called the need for further elaboration by the lawmaker of the planned changes in bankruptcy legislation. The novelty of the results obtained is determined by the analysis of legislation and law enforcement practice in relation to the institution of bankruptcy in order to further develop recommendations on the application, interpretation and amendment of the relevant provisions of bankruptcy legislation.
Keywords: lender, debtor, legislator, right, rulemaking, changes, insolvency, bankruptcy, legal entity, arbitration
State institutions and legal systems

Review: The article is aimed at revealing the problem of participation of local self–government bodies with the legal status of legal entities - institutions in civil legal relations, as well as at identifying ways to resolve it. At the practical level, the problem is expressed in the uncertainty in which cases local self-government bodies act in civil circulation on their own behalf, and in which cases on behalf of the entire municipality. Certain gaps in civil legislation today allow municipalities to create legal entities not only to establish the legal status of their bodies, but even to separate divisions of such a body. At the theoretical level, the problem is expressed in the choice of the optimal and most effective model of participation of the municipality through its bodies in civil legal relations and management of municipal property. Applying the formal legal method from the standpoint of a dialectical approach, the author examines the raised problem from the point of view of the applicability of the institution's design to local self-government bodies. As a result of his reflections, he comes to the conclusion that local self-government bodies are an integral part of a municipality, and therefore cannot be separated from it by putting on the mask of a legal entity. To do this, the author proposes to amend the civil legislation in terms of limiting the spheres of establishment of institutions to the social and cultural sphere, excluding the sphere of management from Article 123.22 of the Civil Code of the Russian Federation.
Keywords: public law, institution, subject of law, legal entity, municipality, legal personality, authority, local government body, private law, management
JUDICIAL POWER

Review: The purpose of this study is to test the extent to which courts of general jurisdiction in some regions of the Russian Federation are accessible to the population from a geographical point of view. The object of the study was the district courts of general jurisdiction located in the district centers of the Kurgan region, and their remoteness from the locations of local governments, law enforcement agencies, airports, bus stations and railway stations. The main research methods were the geoinformation method, the cartographic method, as well as the comparative legal method, including the analysis of the norms of the criminal procedure legislation of the Russian Federation and judicial practice. The application of the geographical approach made it possible to establish in various aspects how accessible the courts of general jurisdiction are to the population living in various municipal districts of the Kurgan region.   The conducted research revealed a number of problems related to ensuring access to justice for the local population. Despite the fact that most of the district courts of general jurisdiction in municipal districts are located within walking distance from local self-government and law enforcement bodies nearby in the district center and have good transport links with bus stations, railway stations and air terminals, yet 1/10 of the district courts remain inaccessible to the population due to remoteness and lack of good and permanent transport communication. In addition, the underdeveloped air communication of the Kurgan region with other regions of Russia does not contribute to ensuring high-quality access to justice.
Keywords: transport accessibility, pedestrian accessibility, the defendant, witness, the victim, access to justice, court session, court, municipal area, municipal center
Law and order

Review: The subject of the study was the reception (borrowing) of the norms of Roman law by the legislation of barbarian states that gained independence after the fall of the Western Roman Empire, as well as the accompanying vulgarization (simplification) of legal norms. The object of the study was the Edict of Theodoric - a collection of legal norms of the VI century, adopted on the territory of Italy on the initiative of the Ostrogothic ruler Theodoric the Great. This document was aimed at ensuring the peaceful coexistence of the Gothic and Roman populations of Italy, which is why it demonstrates the mechanism for including the norms of Roman law familiar to a significant part of the population into a single system of legislation of the barbarian Ostrogothic Kingdom. The main research methods were comparative legal and historical. The main conclusions of the study are the following: 1) the reception of Roman law by barbaric legislation, on the example of the Edict of Theodoric, took place in three directions - the expansion of the original norm, its narrowing and qualitative reinterpretation; 2) vulgarization was an integral part of the reception, but one should not perceive the process of simplifying the norms of Roman law as exclusively negative, vulgarization was one of the mechanisms that ensured the survival of Roman law and the subsequent revival in the legal systems of continental Europe. The novelty of the research is based on the use of comparative legal and historical methods: they allowed to identify the main sources of the Theodoric Edict, compare the provisions of the original norms with their interpretation in the text of the Edict, identify the reasons for verbatim borrowing or rethinking of specific norms.
Keywords: late antiquity, ostrogoths, barbaric truths, vulgarization, Theodoric 's Edict, Roman law, reception, Theodoric the Great, barbarians, Italy