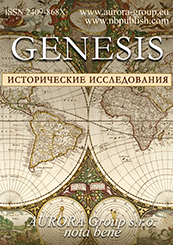 
This issue is currently being formed. All articles presented on this page have already been included in this issue, are considered published, and will remain unchanged in the final version of the issue along with other metadata of the articles.
Founder: Danilenko Vasiliy Ivanovich, w.danilenko@nbpublish.com
Main editor: Kodan Sergey Vladimirovich, Doctor of Law, svk2005@yandex.ru

Review: Today, all over the world, and above all in Russia, there is a significant interest in the history of Chinese studies in the scientific and humanitarian centers of the Russian Federation and the PRC. Academic and applied significance for historians of the two countries acquire an analysis and summary of the experience of the research centers of Chinese in the Far East. Currently, there is an increase in the attention of Russian and Chinese researchers to the scientific cooperation of North-East China with the Far East of Russia. Orientalist V. L. Larin dedicated a considerable part of his works to this problem [3]. Chinese academic studies of scientific exchanges between China and Russia in related fields are mainly reflected in the articles of Tao Lee Lee Lee Jinzin. The object of this statue is Soviet/Russian Chinese. The subject of study is the process of distribution of Chinese studies with the help of research institutions in the Far East. The goal is the disclosure of the main results of analytical centers, showed their role in the distribution of Chinese in the Russian Federation. The author used the methods of scientific knowledge, observed the principles of logical, systematicity and sequence of presentation of the material. For the first time in Russian historiography, an attempt was made in this article to study humanitarian cooperation and summarize the historical experience of the scientific interaction of North-Eastern China with the Far East of Russia. Thus, the active distribution of Chinese studies in the Russian Far East is carried out through the system of scientific institutions in the direction of academic exchanges in the cities of Vladivostok, Blagoveshchensk, Ussuriysk, Khabarovsk, Harbin, Heihe, Jiamus, Chanchun, etc. their cooperation brought significant results and ensured Intellectual support for comprehensive cooperation in many areas. The Far East began to clearly show interest in China as a whole, in its history, culture, economics and science, in the Chinese language.
Keywords: Far Eastern Federal University, Heihesk University, Heilongjian University, Victor Lavrentievich Larin, Olga Pavlovna Elantseva, Institute of Confucius, Chinese, the Far East of Russia, northeast of China, scientific cooperation
History of science and technology

Review: The paper discusses popular science and fiction (primarily science fiction) works of N.N. Shpanov, the Soviet writer and pilot, one of the founders of military fiction genre in Soviet literature. In his works a certain mood in society, its aspirations and expectations, supported by the country’s political leaders, are mirrored. The article analyzes as well N.N. Shpanov’s activity in the field of promotion of knowledge about aviation, writer's prediction on the course of the upcoming clash with a powerful western power (Germany), made by him on the eve of the Great Patriotic War, and the role of military aviation in this confrontation. The main conclusion of the study is that in the 1920-1930s N.N. Shpanov, having gained technical knowledge and broad experience in the period of his studying at the Polytechnic University, then at aeronautical courses and later on while serving in aviation, in his literary work popularizes new ideas coherent with geographical research, science, and technology, especially aviation. Since the late 1930s in writings of N.N. Shpanov the disposition towards spreading the ideas and policies of the Stalin period’s Soviet propaganda showed itself. The imprint of large-scale historical events, military, and technical concepts reflected in books of N.N. Shpanov makes the analysis of his works substantial as it is firmly bound with the history of science, aviation, and social consciousness in the USSR.
Keywords: imaginative literature, history of Russia, history of aeronautic, agitation and propaganda, The Great Patriotic War, science fiction, polar exploration, aviation, history of technology, Shpanov Nikolai
Historical sources and artifacts

Review: The article is devoted to the study of a tombstone from the territory of the Sumkinsky cemetery located near Tobolsk. The extraordinary nature of the find is due to the fact that the tombstone of the beginning of the XX century was accidentally discovered in a later rural cemetery founded in the middle of the XX century, that is, fragments of the monument were brought there specifically. This is also indicated by the unsystematic nature of the location – its parts lay scattered, on the path between the rows of later burials, piled against a metal fence. The tombstone was a three-part stone obelisk, of which the base and the middle part remained. The biographical inscription of the monument was badly damaged. In the process of studying the destroyed text of the epitaph with the involvement of a number of sources, it was found out that the burial belonged to the son of the priest Fyodor Filippovich Afanasyev – Simeon, who died at a young age and was buried in the village of Shishkinsky. More biographical information was found out about his father, who was born in the Voronezh province and graduated from the Theological Men's College. He served as a psalmist in Tobolsk, and then was promoted to deacon. His son was born there. F.F. Afanasyev later became a priest and served in the village of Shishkinsky, Tobolsk district, and then in the village of Ust-Ishim, Tarsky district.
Keywords: necropolitics, epitaph, biography, Ust-Ishimskoye village, Shishkinskoye village, Tobolsk, priest F.F. Afanasyev, stone tombstone, the Sumkino cemetery, Christ the Nativity Church

Review: The Ōbaku school, which represents the third major trend of Zen Buddhism along with Rinzai and Sōtō, appeared in Japan during the Edo period (1603-1868) due to the arrival of Buddhist emigrant monks from China. The article discusses the life of Ōbaku monk named Baisaō who played a decisive role in the development and popularization of the tradition of sencha (brewing leaf tea in hot water) in Japan during the Edo period. This method of brewing tea, popular among Ōbaku monks, which at the initial stage of the development of the teaching was represented by ethnic Chinese, was a reference to the traditions of tea drinking by Chinese intellectuals of antiquity and was actually opposed to Baisaō the existing Japanese tea ceremony. The author concludes that it was familiarity with the teaching of Ōbaku, which personified a corner of Ming China in Japan, that determined the life path of Baisaō associated with the Chinese tea tradition and significantly influenced the formation of the cultural image of the entire epoch - the movement for the popularization of sencha after Baisaō's death took on a truly large scale. It can be said that his active activity in spreading tea culture in Japan, in which Baisaō himself reflected his spiritual ideals, led to the creation of a full-fledged alternative to the Japanese tea ceremony, thanks to which many of his contemporaries and their descendants fell in love with tea drinking again in the spirit of the Chinese sages of antiquity.
Keywords: chanoyu, sencha, Baisaō, tea, Buddhism, Zen, Ōbaku, the Edo period, Japan, matcha