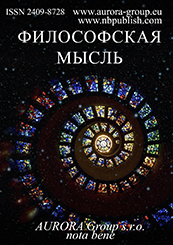 The Journal "Ôčëîńîôńęŕ˙ ěűńëü " had ISSN 2306-0174 and was previously called "NB: Philosophy researches" until December 1st, 2014.


This issue is currently being formed. All articles presented on this page have already been included in this issue, are considered published, and will remain unchanged in the final version of the issue along with other metadata of the articles.
Founder: Danilenko Vasiliy Ivanovich, w.danilenko@nbpublish.com
Main editor: Spirova El'vira Maratovna, Doctor of Philosophy, elvira-spirova@mail.ru

Review: The article deals with the problem of fantasy as a form of consciousness. Ideas about consciousness change along with ideas about human nature. One form of the existence of consciousness is fantasy. Fantasy becomes a part of an anthropological study project about human existence as a reality of dominance of integrative knowledge. The era of conceptualization forms a request for awareness of a priori grounds for figurative perception of information and its living as an object in a fantasy form of consciousness. A feature of fantasy is that in the imagination there is a translation from perception into a generalized transcendental representation by creating a chain of associations, a drawing, a narrative. Non-linear description of the feelings and thoughts of a person in the epoch of romanticism, feeling surpasses intelligence. The formation of fantasy states of consciousness is associated with overcoming mirror reflection and getting into the noumenal world in higher dimensions, similar to mathematics and physics. External situation turns out to be a surface hiding fantasy as a dimension of human creative potential. Modern discussions of the reality of fantasy oppose it as a special form of reality, equal in its properties to the mind. Fantasy is the source of human experience of his being, embodied conceptually in the process of imaging. Imaginative cognition conceptually connects the experience of previous generations preserved in images with experiences in one's own life and the lives of others. As a source of creativity, fantasy extends to scientific knowledge, creating syntheses of different sciences
Keywords: imagination, states, mental life, conceptualization, cognitive scheme, image, imaginative knowledge, fantasy, consciousness, fantasy consciousness