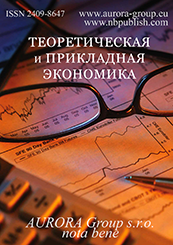 The Journal "Ňĺîđĺňč÷ĺńęŕ˙ č ďđčęëŕäíŕ˙ ýęîíîěčęŕ " had ISSN 2306-4595 and was previously called "NB: Economics, Trends and Management" until December 1st, 2014.

Review: The subject of the research reflected in this article is climate change, which causes serious problems in the development of agriculture in the world. This is especially true in countries where the place and role of agriculture in the economy are decisive. Russia also belongs to them. Changes in solar activity combined with large-scale transformations of agricultural holdings lead to rapid changes in the sectoral structure of agricultural enterprises and agriculture at the national level. The article reveals the features and current state of the agro-industrial complex of Russia on the example of the southern regions, which are considered the most favorable for agriculture. The main conclusions of the study are the identified future trends in the development of agriculture in the southern regions of Russia, taking into account changes in climatic conditions, namely: 1) the beginning of a gradual change in the production focus of individual regions towards completely new crops for climate-altered natural conditions of agricultural lands; 2) the consequence of global warming for agriculture is a reduction in agricultural production due to a decrease in crop yields and livestock productivity, but this is not a negative factor, since the expansion of soil fertility (geography of favorable conditions for agriculture) will allow to optimize yields with a higher economic effect (to cultivate land where the early there was a climatic opportunity for this, to use the most fertile areas for growing new valuable crops).
Keywords: production structure, agricultural enterprises, southern regions of Russia, increasing the temperature regime, climate change, agro-industrial complex, import-export, regional economy, soil fertility, economic effect
Finance, monetary relations and investment

Review: The subject of the study is the dynamics of the development of the scale of the presence of transnational corporations (TNCs) in the foreign market, which have changed significantly at the present stage. This is partly due to the complexity of corporate structures and ownership structures, the specifics of their control over their foreign divisions. At the same time, the scaling of TNCs is also determined by the fragmentation of international production networks, their increasing role in global value chains of holding and financial companies operating in offshore investment centers. These aspects significantly affect the strategies of foreign direct investment of TNCs, the nature and dynamics of foreign direct investment (FDI), the concentration of income from these investments in offshore jurisdictions. The main conclusions of the study are the conclusion that the development of GCC has led to a significant fragmentation of international production, which has become a key strategic direction for the development of TNCs in recent years. At the same time, it is customary to distinguish between vertical and horizontal TNCs in the placement of international production. Vertical TNCs are characterized by the placement of production links in the least expensive countries, and such TNCs have become particularly important within the framework of the GCC system, which provides for a reduction in transaction costs of international production and coordination costs. Horizontal TNCs emerged earlier and preceded the formation of vertical TNCs, focusing on the market, bringing production closer to the consumer and, thus, reducing trade costs. It is noted that vertical TNCs have increasingly resorted to concluding contracts with independent partners abroad on the basis of licensing, franchising and contract production strategies. The final, most preferred variant of TNCs, which developed in the 1990s, were TNCs in the form of international production networks operating within the framework of the GCC.
Keywords: tax reform, offshore jurisdictions, foreign divisions, international production, offshore investment centers, foreign direct investment, multinational corporation, capital export neutrality, foreign economic activity, global crisis
World economy and international economic relations

Review: Economic relations between Russia and Germany are developing in the context of such global challenges as the aggravation of the international political situation, the introduction of anti-Russian sanctions, the economic recession against the background of the Covid-19 pandemic. The subject of this study is the regional peculiarities of the placement of German capital on the territory of Russia. The object of the study is 55 subjects of the Russian Federation, which are recipients of direct German investments. The authors focus on studying the dynamics, species and geographical structure of accumulated direct German investments in the context of individual subjects and federal districts. The article assesses the level of differentiation of direct German investments within individual federal districts, calculates sub-federal investment positions, identifies trends in investment cooperation between Russian and German enterprises carried out within the framework of special economic zones. It is established that the factors contributing to the placement of German capital in European Russia are the preferential localization of special economic zones in this part of the country, as well as the conclusion of special investment contracts on the basis of already functioning production facilities. According to the results of the study, the authors summarize that the current regional structure of German investments does not contribute to the achievement of such a task provided for by the Spatial Development Strategy of the Russian Federation as the reduction of interregional socio-economic imbalances. The scientific novelty of this study is to develop recommendations for expanding investment cooperation between Russia and Germany in the Far East, special attention is paid to the role of state institutions. The authors substantiate that the implementation of investment projects for the production of wind power units and assemblies, solar panels, as well as the construction of wind and solar power plants in the Far East should be considered as a promising area of cooperation between Russia and Germany.
Keywords: innovative technologies, special economic zones, Germany, Russia, region, federal district, direct investments, investment cooperation, localization of production, priorities of economic policy