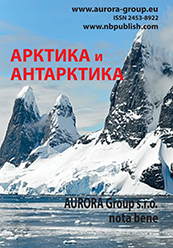 This issue is currently being formed. All articles presented on this page have already been included in this issue, are considered published, and will remain unchanged in the final version of the issue along with other metadata of the articles.
Founder: Danilenko Vasiliy Ivanovich, w.danilenko@nbpublish.com
Main editor: Vasil'chuk Yuriy Kirillovich, Doctor of Geology and Mineralogy, vasilch_geo@mail.ru

Review: This article provides a database of the local snow-measuring observations for three river basins in the south of Western Siberia, reviews the methodological peculiarities of the conduct of measurements, and compares the acquired data with the observations at weather stations and available satellite data (CGLS SWE). Observations were carried out in several stages over the period of ten years (2011-2021) in small river basins of Kuchuk, Kasmala, and Mayma Rivers, and reflect the transition from the West Siberian Plain to the Altai lowlands. Total of 25,000 measurements of the parameters of snow deposits (snow mass and snow storage) were made over the years. The database of snow measuring observations is accessible to public. The comparison with station and satellite data indicated significant variances, but also fairly good coherence in some reservoir basins. According to satellite data, the common to basins mean squared error of snow storages was 42.9 mm, which is slightly higher than the claimed by the product engineers (37.4 mm). The time-limited observation data on the permanent routes of weather stations demonstrated the mean squared error of snow storages of 43.5 mm. In winter period, the mean squared error of satellite data gradually increased to the period of maximum accumulation of snow in reservoir basins. Moreover, the errors of satellite data did not depend on the snowiness of the winter period; and most likely, are associated with the parameters of microstructure of the snow mass in separate seasons.
Keywords: Kasmala, Altai, database, snow density, snow surveys, snow depth, snow water equivalent, Mayma, Kuchuck, river basin