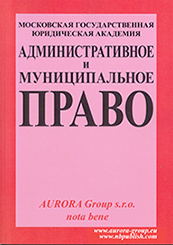 Review: The research object is social relations in the sphere of creation and implementation of the system of social guarantees for former public officials in the regions of the Russian Federation. The authors consider such aspects of the topic as the guarantees of pension rights of former public officials in the regions of the Russian Federation and the problem of compensation payments to this category of citizens, who have retired on their own volition or upon the expiration of the term of office. Special attention is given to the analysis of the legislation of particular regions of the Russian Federation, which have different approaches to formalization of such guarantees or their particular elements. The research methodology includes general scientific methods of dialectical materialism, generalization and analysis, and specific historical method and the method of comparative jurisprudence. This work is one of the first attempts to study the institution of social guarantees for former public officials in the regions of the Russian Federation with regard to the latest changes in the legislation and law enforcement practice in this sphere. The authors formulate the substantiated and reliable conclusions and proposals about the further improvement of legal regulation of this sphere of social relations.
Keywords: court, position, resignation, payments, fight against privileges, retirement, legislation, public office, financial guarantees, regions of the Russian Federation
References (transliterated):
O tipovykh gosudarstvennykh dolzhnostyakh sub'ektov Rossiyskoy Federatsii: Ukaz Prezidenta RF ot 04.12.2009 g. ą 1381 // Sobranie zakonodatel'stva RF. 2009. ą 49 (2 ch.) St. 5921.
O gosudarstvennykh dolzhnostyakh Altayskogo kraya Zakon Altayskogo kraya ot 09.12.2005 g. ą 120-ZS // Sbornik zakonodatel'stva Altayskogo kraya. 2005. ą 116. Ch. 1.
O dopolnitel'nykh sotsial'nykh garantiyakh litsam, zameshchayushchim (zameshchavshim) gosudarstvennye dolzhnosti Kaluzhskoy oblasti, dolzhnosti gosudarstvennoy grazhdanskoy sluzhby Kaluzhskoy oblasti, sem'yam, a takzhe detyam umershikh lits, zameshchavshikh ukazannye dolzhnosti: Zakon Kaluzhskoy oblasti ot 25.02.2011 ą 120-OZ // Vesti. 2011. ą 80-82.
O gosudarstvennykh dolzhnostyakh Murmanskoy oblasti Zakon Murmanskoy oblasti ot 07.07.2005 ą 652-01-ZMO // Informatsionnyy byulleten' «Vedomosti Murmanskoy oblastnoy Dumy». 2005. ą 56.
O gosudarstvennykh dolzhnostyakh goroda Moskvy Zakon g. Moskvy ot 15.07.2005 ą 43 //Vestnik Mera i Pravitel'stva Moskvy. 2005. ą 44.
Ob usloviyakh predostavleniya prava na pensiyu za vyslugu
Administrative process and procedure

Review: The research subject is international tendencies and national mechanisms of guaranteeing the rights of migrant domestic workers in the context of their adaptation to new social relations for national security protection. Migrant domestic workers are the most vulnerable category of labor migrants, which is explained both by their gender and by the peculiarities of their work. Multiple exploitation (by employers, families and the state of origin), isolation determined by the specificity of work (especially connected with home care), complicated family relations – these factors have negative impact on psychological and physical condition of migrant domestic workers, increasing the risk of negative influence of asocial persons, formation or aggravation of mental diseases. To acquire the most reliable scientific results, the author uses the set of general scientific methods (system-structural, formal-logical, hermeneutical approaches) and specific methods of legal cognition (comparative-legal and formal-legal methods). Taking into account the specificity of the research subject, the author applies the interdisciplinary approach based on sociological data. The impossibility to realize public supervision in the sphere of migration and protection of labor, low level of legal culture and religion-based legal consciousness of most migrant domestic workers are the factors of their involvement in extremist (terrorist) activities. Therefore, it is critically important to implement the state policy aimed at adaptation and involvement of migrant domestic workers in social relation using the activities of social organizations, cultural and national centers, labor unions, etc. It is necessary to as soon as possible ratify the Convention No 189, containing minimum labor standards for migrant domestic workers, and, taking into account the experience of Canada, successfully realizing the Live-in Caregiver Program, to develop a state program of adaptation of migrants with regard to the peculiarities of work of migrant domestic workers.
Keywords: Canada, migration, exploitation, international labour standards, migrant domestic worker, human rights, national security, labor contract, extremism, terrorism
References (transliterated):
Behind Closed Doors: Protecting and Promoting the Human Rights of Migrant Domestic Workers in an Irregular Situation // International Labour Organisation: ofitsial'nyy sayt [Elektronnyy resurs]. – Rezhim dostupa: http://www.ilo.org/global/topics/labour-migration/projects/gap/publications/WCMS_446720/lang--en/index.htm (data obrashcheniya – 03.07.2017)
International standards related to domestic workers and women migrant workers // International Labour Organisation: ofitsial'nyy sayt [Elektronnyy resurs]. – Rezhim dostupa: http://www.ilo.org/wcmsp5/groups/public/---asia/---ro-bangkok/documents/publication/wcms_414569.pdf (data obrashcheniya – 03.07.2017)
Torriente A. Migrant Domestic Workers, Health and HIV / A. Torriente // Global Action Programme on Migrant Domestic Workers and Their Families: Research Series (2016) // International Labour Organisation: ofitsial'nyy sayt [Elektronnyy resurs]. – Rezhim dostupa: http://www.ilo.org/wcmsp5/groups/public/---ed_protect/---protrav/---migrant/documents/briefingnote/wcms_503
Administrative law, municipal law and environment issues

Review: The research subject is the legal regime of granting the right to use subsurface resources in the Islamic Republic of Iran. Special attention is given to classification of petroleum contracts and transformation of their essential conditions in the historical dynamics with regard to different types of petroleum contracts. The authors consider upstream contracts, downstream contracts, oil and gas trade contracts and the procedure of their drawing up, agreeing, concluding and approving. The study reflects the content of objective operation contracts as a specific type of petroleum contracts and their main categories: concession, investment, production and service contracts. The authors reveal the content of new-generation Iranian petroleum contracts (IPC). The research methodology is based on general scientific methods (dialectics, comparison, analysis, synthesis, analogy, deduction, induction, etc.) and specific methods (formal-logical, dogmatic, formal-legal, and the method of interpretation of law), the comparative-legal method, the method of state-legal modeling, the historical-legal and system methods, prognostication, etc. The authors come to the following conclusions: firstly, Iranian subsurface resources are made allowable for use on the basis of a petroleum contract; secondly, the procedure of making subsurface resources allowable for use is a formalized procedure of concluding petroleum contracts; thirdly, the access to subsurface resources in Iran is possible only subject to agreed conditions of a petroleum contract, based on a standard project, with the Government of Iran and the Iranian Economic Council and final approval by the Ministry of petroleum upon indirect agreeing of the conditions of subsurface resources use with the Parliament of Iran; fourthly, the Parliament of Iran indirectly agrees upon the conclusion of petroleum contracts and each stage of their performance (petroleum operations) by means of regulation of incomes and expenditures of petroleum activities in the laws “On annual budget”; fifthly, the legal regime of subsurface resources use in the Islamic Republic of Iran is in a transitive state, and legislation on natural resources is a complex sector, which combines the interests of public and private companies in the context of growing public influence in this sphere; sixthly, Iran is planning a gradual transformation from agreement-based system of subsurface resources use to a licensing or a mixed system, from an indirect procedure of making subsurface resources allowable for use by foreign investors to a direct procedure, which would be realized without the involvement of the National Iranian Oil Company. The scientific novelty of the study consists in the fact that it considers the reasons for and the procedure of making Iranian subsurface resources allowable for use and the state-legal mechanism of subsurface resources use management including the checks and balances model in realization of the sovereign right of Iran to use subsurface resources within its water area and state territory.
Keywords: Iranian Petroleum Operations, Trade Contracts, Downstream Contracts, Upstream Contracts, Petroleum Contracts, Iranian Subsurface resources use, Carbon Buy-back, Petroleum Swap, Iranian Petroleum Contract, Iranian Foreign Investment
References (transliterated):
Ofitsial'naya gazeta Irana ą 12317 ot 12 iyunya 1987 goda.
Ofitsial'naya gazeta Irana ą 25218 ot 12 iyulya 2011 goda.
Zakon Irana «O morskikh regionakh Islamskoy Respubliki Iran v Persidskom Zalive i Omanskom more» ot 20 aprelya 1993 goda.
Abdulkhusseyn Shiravi. Neftyanoe i gazovoe pravo Irana. Mizan Legal Foundeyshen Tegeran: 2014. S. 346.
Ofitsial'naya gazeta Irana ą 25218 ot 12 iyulya 2011 goda.
Postanovlenie Pravitel'stva Irana «Ob obshchikh polozheniyakh, strukture i modelyakh kontraktov po dobyche nefti i gaza» ą Kh53367T/57225 ot 6 avgusta 2016 goda.
Abdulkhusseyn Shiravi. Neftyanoe i gazovoe pravo Irana. Mizan Legal Foundeyshen Tegeran: 2014. S. 354.
Lowe John S. Oil and Gas Law in a Nutshell, p. 169.
Sanai Mekhdi, Ruban Larisa. Iran: bol'shie plany neftyanoy derzhavy // Neft' Rossii, 2014. ą 6.
Kasaev El'dar. Pravovoy rezhim nedropol'zovaniya i investitsiy v TEK Irana // Obozrevatel', 2007. ą 12. S. 62.
Energetika Islamskoy Respubliki Iran. Neft'. // Globus, 2007. ą 4. S. 8.
Energetika Islamskoy Respubl
ADMINISTRATIVE AND MUNICIPAL LAW AND FINANCIAL ACTIVITY

Review: The article studies administrative and jurisdictional activities of the Federal Antimonopoly Service (FAS) of Russia in the banking sector. State antimonopoly policy in the banking sector is one of the most important mechanisms guaranteeing the achievement of socio-economic goals in the social life. The author considers the process of interaction between the FAS of Russia and credit organizations; reveals the problem of reporting wrong information by credit organizations upon the requests from the antimonopoly authority, and the problem of inconsistency of the conditions about the full value of a credit with the Federal law of 21.12.2013 No 353 “On consumer credit (loan)” and the Decision of the Plenum of the Supreme Commercial Court of the Russian Federation No 58 of 08.10.2012. The research methodology is based on the modern achievements in epistemology. The author uses general philosophical and theoretical research methods (dialectics, the system method, analysis, synthesis, analogy, deduction, observation and modeling), traditional methods of jurisprudence (formal logical) and the methods of specific sociological researches (statistical, expert evaluations, etc.). The author concludes that the FAS of Russia and the Bank of Russia should develop joint statutory instruments in order to formulate the concept and the list of banking services and the procedure of calculation of the production cost of a unit of banking service (and/or an analogous indicator), and formalize the peculiarities of credit services advertising with account for the position of the Supreme Commercial Court of the Russian Federation. The scientific novelty of the study consists in the proposals about the improvement of administrative and jurisdictional activities of the Federal Antimonopoly Service of Russia.
Keywords: advertisement, economy, responsibility, credit institutions, legislation, bank, The FAS of Russia, state, improvement, practice
References (transliterated):
Ofitsial'nyy sayt FAS Rossii URL: http://fas.gov.ru/documents/documentdetails.html?id=15117 (data obrashcheniya 21.05.2017).
Lapina M.A. Administrativnaya yurisdiktsiya v sisteme administrativnogo protsessa: monografiya. M.: Finansovyy universitet, 2013. 140 s